Skip to content Skip to footer
WellhealMay All Be Healthy Close

Binaural Beats Therapy: What is it and How It Affects Your Brain?

“Binaural Beats Therapy” or “Digital Drugs” whatever you say, is supposed to help you to cure several mental illnesses, including disorders like anxiety, stress, depression, and sleep.

But do you know how it works & what are the benefits of binaural beats?

Let’s understand more about it.

What Are Binaural Beats?

Heinrich Wilhelm Dove (Prussian meteorologist ) discovered the perceptual phenomenon of “binaural beats” in 1839, and it was first discussed in the scientific literature in 1973 by Gerald Oster’s article “Auditory Beats in the Brain”.

When you hear two beats in each ear, each with a slight variation in frequency at that time, your brain generates a new beat, i.e. a tone that produces from the difference in frequencies. And this new tone is called a binaural beat.

Let’s understand with an example.

The binaural beat at a time is 10 Hz, which is considered an auditory illusion. So, instead of listening to Two unique tones, you heard a new tone at 10 Hz.

Note: Binaural Beats only work when the frequencies between two tones are less than 1000 Hz. And the gap between the two tones is not over 30/35 Hz. 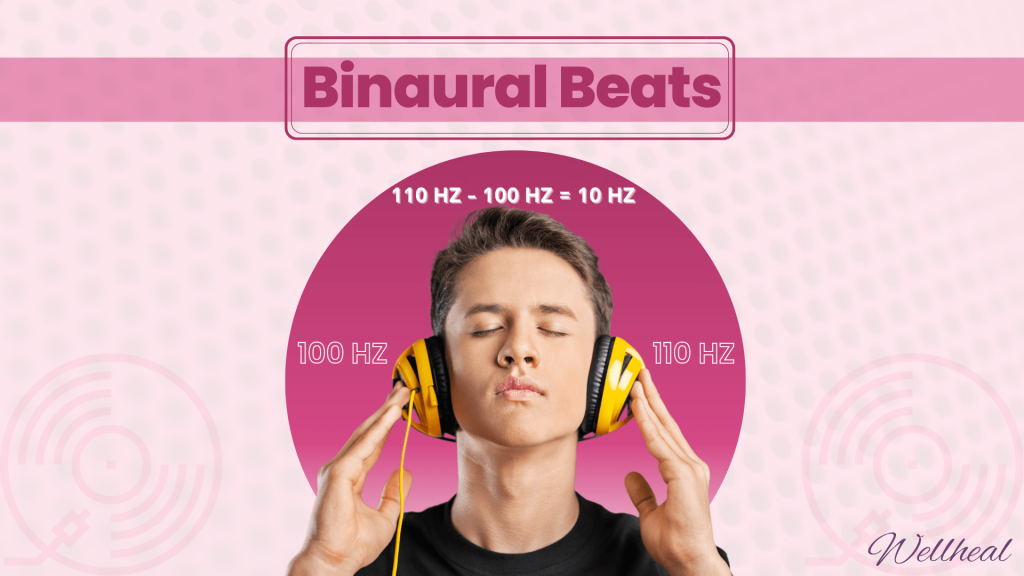 1) As a kind of therapy or medicine, and

2) As an alternative option to psychoactive drugs that affect your nervous system, mood, cognition, or behavior.

How Music Used As A Medicine !!!

How Does Binaural Beats Therapy Affect To Your Brain?

Using binaural beats can be integrated into a variety of other widely practiced digital sound-based therapies, including ASMR (Autonomous Sensory Meridian Response). Recent studies suggest that ASMR may have therapeutic advantages for mental health, which emphasizes the broader potential of digital sounds.

The main unit of measurement for Binaural Beats is Hertz.

The difference in the frequencies can ‌produce binaural beats. Various degrees of brain wave activity are correlated with different results for each frequency.

When binaural beats are exposed to your brain at a new frequency, your brain waves are driven to synchronize with it by putting you in a new “brain state.”

There are 5 different ‌brain waves. Generally, low-frequency waves are linked with “Delta” & “Theta” waves. These waves boost your relaxation and sleep ability.

While high frequencies are related to “Gamma” waves. It could increase your level of alertness, concentration, or memory.

The ability to pay attention has been connected to midrange frequencies. When you focus inside (like in meditation), your brain enters an “Alpha” state, and when you are tuned in to your environment, your brain will enter into a “Beta” state.

Connection Between the Brain and Binaural Beats Therapy

Your brain activity matches the frequency established by the beat’s frequency when you listen to binaural beats. It is known as the frequency-following effect.

This means that you can teach your mind to achieve a particular condition of consciousness via binaural beats.

The superior olivary complex is the first part of the brain to handle sound information from both ears when you listen to binaural beats. It synchronizes a range of neuronal processes across the brain.

This complex responds when it detects two overlapping frequencies by producing a binaural beat that changes the brain waves. This synchronization of neural activities across the brain is known as entrainment.

Entrainment is a common part of brain function. Some academics claim that specific binaural beats can strengthen particular brain waves when you listen to them. As a result, several brain processes regulate thought and emotion that can be sped up or repressed.

Types Of Brain Waves and Their Benefits 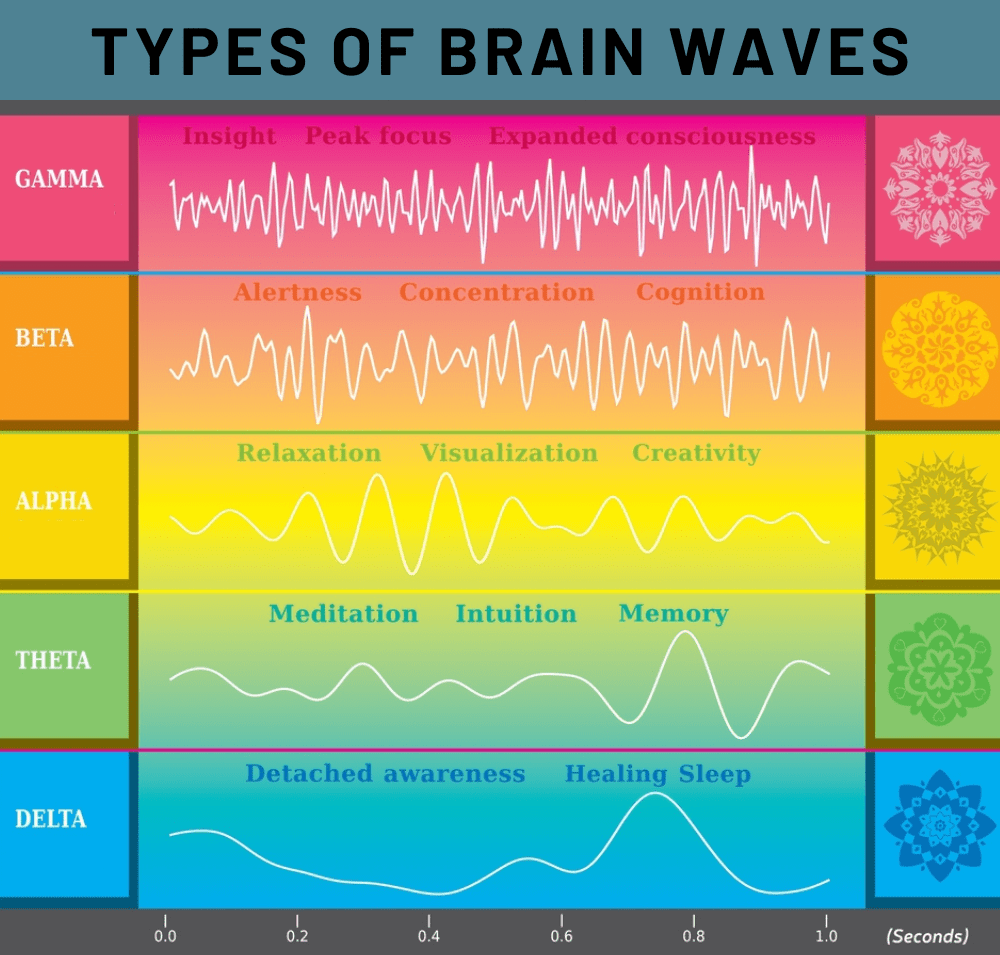 According to the preliminary study, binaural beats may improve your sleep quality. Binaural beats with a delta frequency of 3 Hz were used in a study to illustrate how they can cause the brain to go into delta activity.

Soccer players who listened to binaural beats with frequencies between 2 and 8 Hz reported better sleep quality, less tiredness, and easier waking up. Binaural beats can aid in lowering anxiety, which ‌promotes better sleep.

These researches have been conducted on a portion of people. Hence, we recommend you always consult a physician before utilizing binaural beats. 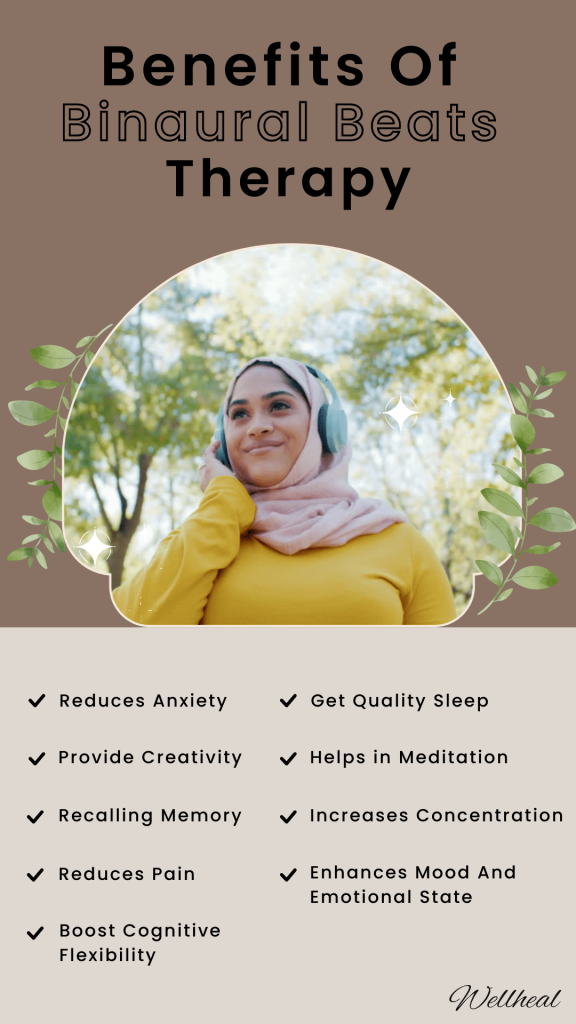 A journal published on 15 people showed that those who listened to binaural beats in the theta range (4 – 8 Hz) for 30 minutes had reduced symptoms of mild anxiety.

Several studies have shown a link between binaural beats and decreased preoperative anxiety in surgery patients. Here are the 10 Mindfulness Exercises For Anxiety Relief.

In a study, participants who listened to 30 minutes of theta (6 Hz) binaural beats had an easier time entering a deep meditative state.

Meditation can reduce stress, anxiety, and other diseases. And details given by Nantawachara Jirakittayakorn and Yodchanan Wongsawat’s novel suggested that ‌it can also lower blood pressure, inflammation, and perception of pain.

Thus, binaural beats could be a helpful tool for people who want to meditate for improving their health.

The evidence of the global-local task with 36 participants found that individuals who listened to gamma (40 Hz) binaural beats for just 3 minutes improved attention to certain visual elements.

Another study on Binaural auditory beats claimed that those who spent 30 minutes listening to beta (16–24 Hz) binaural beats had increased concentration easily.

A pilot study conducted on Binaural beat technology in human health by Helané Wahbeh, Carlo Calabrese, and Heather Zwickey claimed that those who listened to theta (7 Hz) binaural beats for 30 minutes had decreased anxiety, unhappiness, and tiredness.

As a result, the participants improved their feeling, became more cheerful, and saw a decrease in their depression symptoms.

Some interesting research suggests that binaural beats can improve many forms of memory. By listening to alpha binaural beats, you can enhance your memory to recall old things.

According to the National Institutes of Health, chronic pain affected 10% to 50% of the adult population in the United States in 2011, costing US companies $61 billion each year.

For 20 minutes, participants listened to two recordings for 14 days. One with TBB (theta binaural beats) at 6 Hz and the other with a non-binaural beat tone at 300 Hz.

Consequently, the analysis showed that the group with binaural beats had a significant effect in reducing subjective pain intensity over the non-binaural interventions.

The impact of sleep deprivation on psychophysical performance and well-being is studied in depth and shows how you can improve the quality of your sleep!!!

So, it claimed that binaural beats around 2-8 Hz are the best option for getting deep sleep.

According to a study by Leiden University, The Multitask ability (Cognitive Flexibility) of 40 students (32 female, and 8 male) showed improvement in just 3 minutes by listening to gamma binaural beats (40 Hz).

Many cognitive processes, some of which are affected by the neurotransmitter dopamine, are necessary for human creativity.

This shows that therapies that either directly control dopamine production or transmission, or impact dopamine-driven systems, may boost creativity.

An experiment on 24 participants showed that those who listened to either alpha (10 Hz) or gamma (40 Hz) binaural beats for just three minutes had enhanced indicators of divergent thinking. It is a component of creativity related to the capacity to devise various solutions to a problem.

In the past 25 years, many studies have been done on the benefits of Binaural Beats therapy.

These studies show how binaural beats affect your brain and help in reducing anxiety, & stress and increasing your mood.

Let’s have a look at the list of a few studies done in this context.

According to the research, regular listening to binaural beats reduced stress and anxiety and increased awareness, concentration, motivation, confidence, and meditation.

All the information given above has been from viable sources and thoroughly researched by reputed organizations across the world.

Different frequencies of binaural beats have different advantages. Some of them reduce your anxiety and some of them improve your quality of life.

So, choose the best binaural beats therapy for you (as per your requirement).

Disclaimer
The information provided here is just for education purposes only. Kindly consult your physician before making any medical changes. 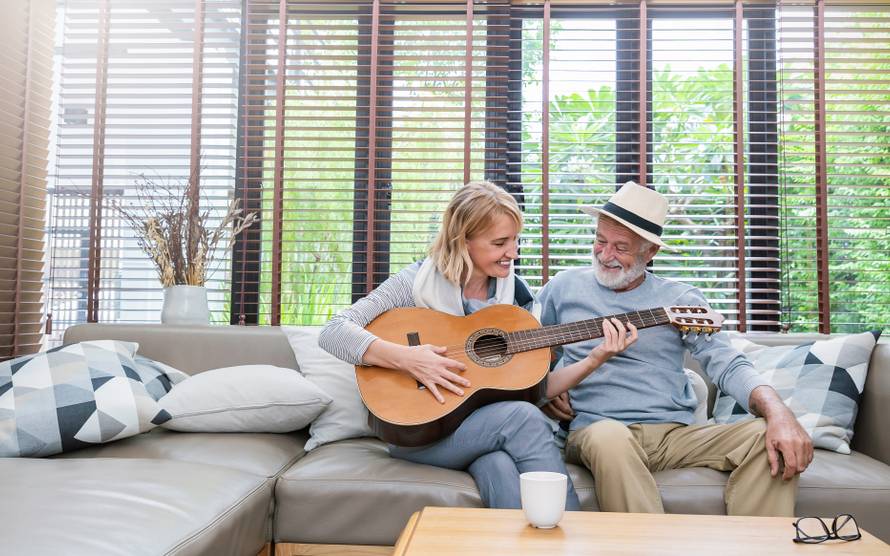 How to keep your brain young with Music? 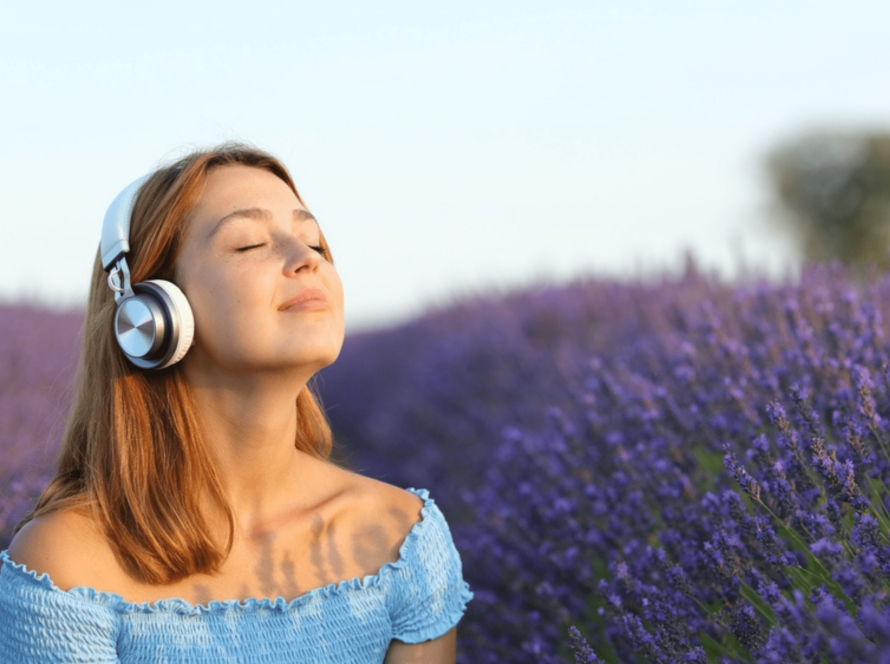 A Complete Guide to Music Therapy 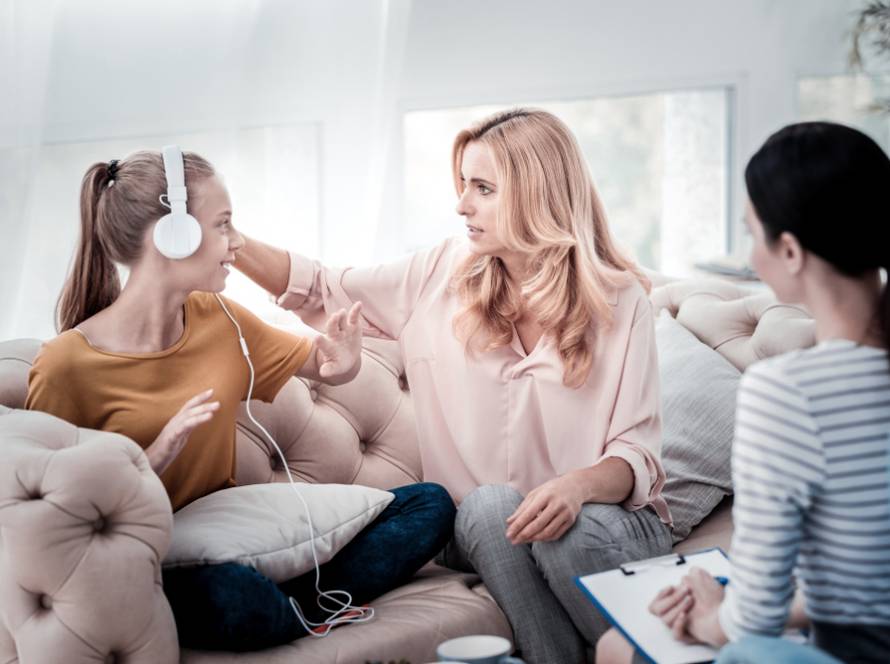 The Surprising Psychology of Music